Paul Caine, Chief Executive of Trust IV and founding member of Camerata Connect recently attended one of our Songlines sessions with his daughter Imani.  They were both so impressed with the project they decided to write a blog about their experience. 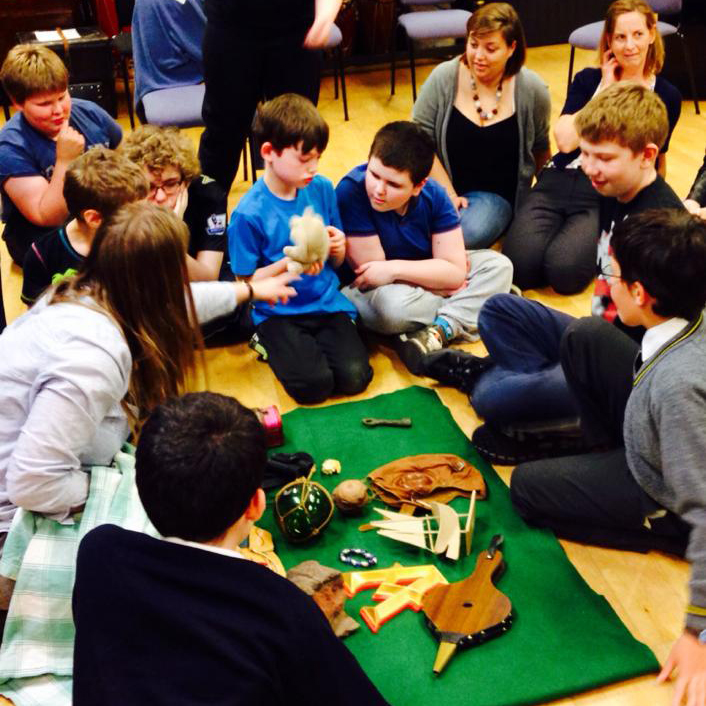 At last, an opportunity to see the Camerata outreach work in action, tonight I am paying a visit to the Royal Northern College of Music (RNCM) to see Songlines, an exciting and inclusive music theatre project for young people with ASD/Asperger’s Syndrome aged 10-14.

Now in its fifth year, Songlines is an opportunity for young people with ASD and their peers to explore their creative side and devise a brand new piece of music theatre with artists from Manchester Camerata and the Royal Exchange Theatre.  Developing skills in music, drama and team work in a friendly, supportive environment during free weekly sessions, before sharing their newly created piece with family and friends at the end of each term.

I arrived at RNCM and after a quick cup of tea with Harriet we wandered up to the studio where the Songlines group meets.  Some young people were eagerly waiting outside with their parents and helpers, and they took no time to introduce themselves to the new boy on the block – me.

At the start of the 2 hour workshop, we spent some time agreeing the agenda, which comprised three items: Music, Art, Story.

Kate got things started by leading a rhythm session where we did the heads, shoulders, knees and toes routine with us patting each a decreasing number from 8 down to 1.  I was able to keep up, but I think people could hear me creaking when I went for the toes!!  Next Kate handed out song sheets for a couple of songs from the new Disney film Frozen.  Never seen it myself, my kids were of the Lion King and Mulan era, so I really wasn’t familiar with the song.  But fear not, the youngsters all seemed to know the words without the sheet, and were spot on with their musicality too!

After the singing, the giant story-teller in his magic cloak was unveiled and Janet, a percussionist from Camerata, got out her box of tricks and demonstrated a vast array of gongs, cymbals and instruments from her personal collection.  We were then encouraged to take one and imagine a story that the instrument could tell.  The hook was the story-teller’s pocket.  When it was unzipped in front of us, our instrument had to tell its story, before the pocket was zipped shut. 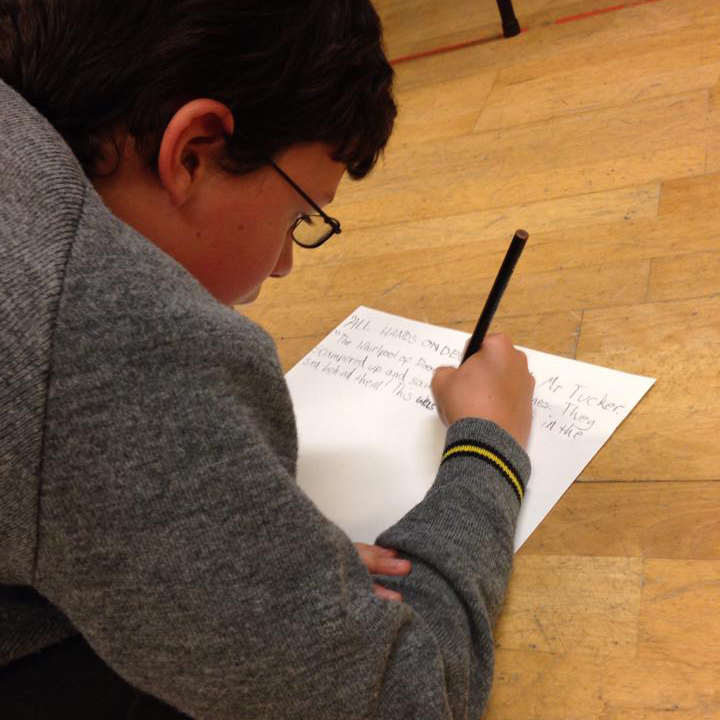 After the musical story telling we went into the art/craft session, making pockets for the story-teller’s cloak.  What fantastic imaginations were on display, some very well thought through and in some cases very scientific back-stories were concocted for the pockets.  Everyone worked at their own pace, supported by Caroline whose gentle approach was really nice to observe.

By this point I was wondering how on earth so much could be crammed into such a short time, and we had only been at it for an hour and a half!!

Next Kate was back in the chair, this time composing a melody and writing the lyrics to a song about the story-teller.  Everyone joined in – some helped on piano, others contributed lyrics.  We quickly arrived at a song we all agreed on.

We concluded the evening with Sarah telling us a story, part of King Leah, which is to be continued next week.

The interesting thing now is that the peer group meets independently on Thursday and they communicate with the Tuesday group through their contributions to the story teller and his cloak.  In early 2015 the two groups come together and work collaboratively towards the end of course concert.

My abiding memory is the inclusive way the young people worked together, at their own pace and each accepting the foibles of the other without question.  We got through the agenda, on time and without any issues, and all left feeling they had had a good time, and created something worthwhile.

If Songlines haven’t been put off by my tone deafness, and my lack of creativity compared to the young people then I will be back for more.

‘From Songlines to Accordion’ by Imani Caine 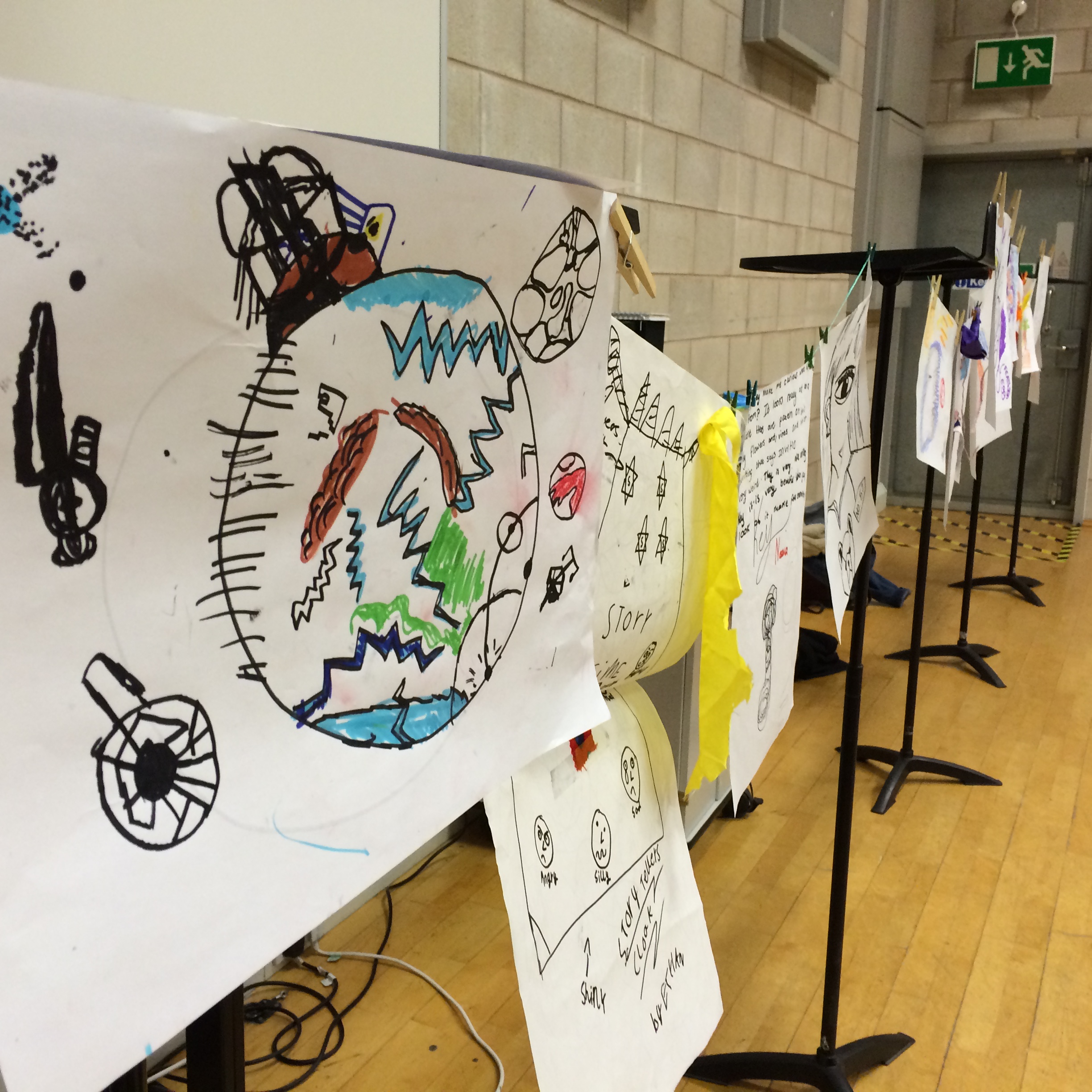 I was invited along to ‘Songlines’, which is a fantastic group organised by the Camerata working with children ages 10-14 with Autistic Spectrum Disorder, and their non-autistic peers.

I really enjoyed working with the kids making up stories, replying to notes from the non-autistic group, and experimenting with percussion instruments.  I could really see that the group had brought out confidence in the kids that they may not be able to find elsewhere, and that this was a safe and supporting environment where they could make friends and unwind from the stresses of everyday.

All the kids were lovely and I completely enjoyed my time with the group.

Later my dad suggested we go to the Camerata event at the Gorilla bar to watch accordion player Martynas Levickis and accompanying strings from the Camerata Orchestra. You don’t tend to think of accordion as a ‘classical instrument’, when I think of the accordion, my mind tends to wander to street corners in Berlin or something similar. But on Tuesday night I made a “new discovery” of accordion music, as Martynas put it.

The proximity of the audience to the performance really brought it to life, and added a new element to this foray into the world of accordion. Vivaldi’s Winter from his Four Seasons Suite was a familiar piece, but the change from the usual violin soloist to the accordion made an interesting variation on the original.

The contemporary music such as ‘Flashing’ and Lady Gaga’s ‘Telephone’ really brought a new dimension to accordion music, and demonstrated the versatility of the instrument, especially in talented hands such as Martynas’. His expression and life during the performance really showed his passion for the music, and he has a fantastic stage presence. The sonnets and composer’s comments before a few pieces also added to the experience, as you can listen to the music as it was envisaged by the creator, and this really added depth to the audience understanding.

I thoroughly enjoyed my whole evening, and both events show the Manchester Camerata to be an astounding musical presence both in the concert hall, and in the community.