Portrait Of An Italian – Seen And Heard

Manchester Camerata’s Portrait of an Italian concert on Friday 18 November at the RNCM – featuring the virtuosic playing of cellist Giovanni Sollima – received a thunderous response from the audience with an amazing three encores. The reviews are now coming in. Here’s the viewpoint of critic Michael Cookson at Seen and Heard International. 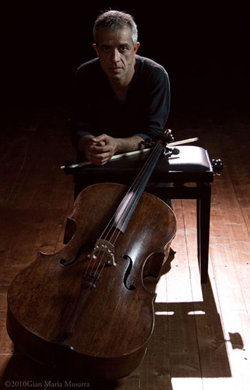 “Last night I was anointed by the Sollima experience and now I’m a disciple.

Entitled Portrait of an Italian not surprisingly his fascinating concert was infused with Italian connections. Running through the all-Italian concert programme was Sollima’s own Italian heritage played by two soloists on Italian made cellos.

(Incidentally there is a webcast of the concert available on www.medici.tv which I have viewed and is excellent.)

Giovanni Sollima, a Palermo born musician,sometimes described as the ‘Jimi Hendrix of the cello’, has collaborated with many of the greatest names in the music world.

Tonight’s music didn’t lend itself to too many Hendrixian effects as Sollima presented a programme that fused music from the classical era of Boccherini and neo-Renaissance Respighi with the eclectic yet accessible modernity of his own compositions.”

To open the concert Giovanni Guzzi directed from the violin the Third Suite from Respighi’s Ancient Airs and Dances. Based on sixteenth and seventeenth century lute and guitar pieces, Respighi’sSuite for strings is elegant and highly attractive yet the writing contains a dark, almost sinister, undercurrent.

With the violins and violas standing to play the rich mellow sound of the Camerata was exceptional.

Watch the concert on Medici.tv

Read the whole review on Seen and Heard