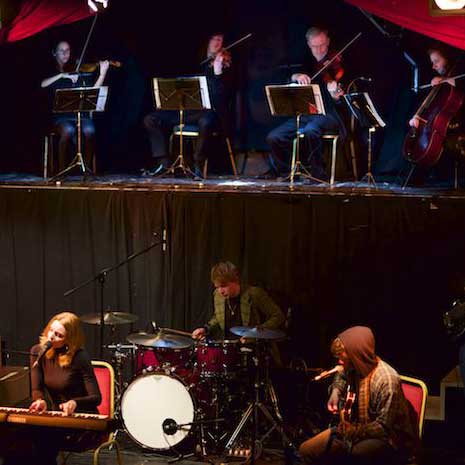 When this co-headline show was announced earlier this year we became rightly very excited. Saint Saviour‘s delightful In The Seams, released in November, was recorded up the road from The Kazimier at Parr Street Studios, with Bill Ryder-Jones having provided thoughtful and sympathetic production. Accompanied by Manchester Camerata, the album has a delicate and mournful beauty that allows Becky Jones‘ exquisite voice to shine.

If expectations were raised in anticipation of a triumphant homecoming, we certainly were not to be disappointed.

What was immediately striking was the atmosphere in the close-to-sold-out Kazimier. A hushed reverie descended as the Manchester Camerata string quartet took their precarious position high on the shelf at the rear of the stage. An expectant tension filled the air; as if the audience were aware that they were about to witness something special. There was an electrifying silence as the band took their positions, before a regal looking Saint Saviour glided elegantly down the steps and onto the stage.

Modestly and with great humility, Bill, on guitar duty, led the applause that greeted her arrival; clearly aware that, although performing first, Saint Saviour was the night’s undoubted star attraction. The admiration and respect was most evidently mutual. On introducing her band and the string quartet, Becky allowed Bill to receive the deserved acclaim before noting that Bill had written the string arrangements that lent such fragility and atmosphere to her songs.

The performance itself was remarkable. The musical accompaniments were sensitive and elegant, enabling Saint Saviour‘s voice to take centre stage. And boy, what a voice. Clearly reminiscent of the likes of Alison Goldfrapp and Kate Bush, what was most striking alongside its purity, was its honesty.

Where too often classical singing voices can appear cold and emotion-free in their technical proficiency, Saint Saviour‘s voice was laced with feeling and warmth; the occasional tremor bringing a reassuring humanity to proceedings. In the live arena her voice has a force and power that, without diminishing her recorded output, doesn’t quite come through on the LP. That this is achieved without sacrificing its delicate vulnerability is nigh on extraordinary. 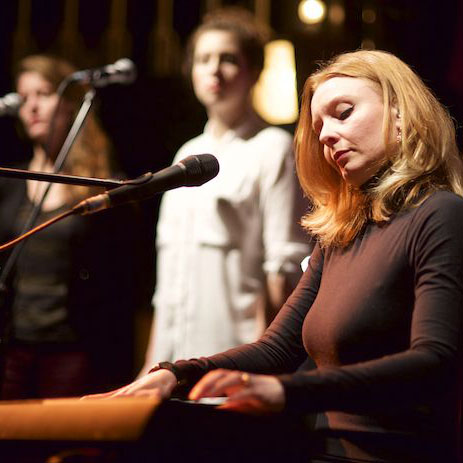 It was these qualities, when married with the profoundly personal nature of her songs, that made the performance so captivating. Penultimate song and recent single Let It Go was performed with a tremulous intensity, the barest quiver in her voice acting like a window into her soul. As the song drew to an end the emotion was etched into her face.

Earlier, Craster, a paean to her native North East, offered a thoughtful take on the role of man in the wider natural world while Sad Kids lightened the tone as well as providing a glimpse into Saint Saviour‘s adolescent world. Having seemingly spent her time staring longfully at callow indie kids in the NME wondering why they appeared so sad, let’s hope she picked up tickets for the Ride reunion gigs next year!

Other set highlights were the opener I Remember, the deeply poignant Nobody Died and, to finish, an older song, Reasons, which afforded her greater expressive licence and brought Bill to his feet to apply slightly more powerful electric guitar licks.
Bill Ryder-Jones faced a tough job following on from that but was immediately successful in lightening the mood and changing the atmosphere. Equipped with a self-deprecating humour and an easy, relaxed presence, Bill engaged the audience in playful reciprocal raillery that liberated the crowd from the rapt intensity engendered by Saint Saviour‘s performance.

After paying a warm tribute to Saint Saviour – glancing up to the balcony before muttering something about her awaiting a McDonald’s delivery – he opened his set with the title song from A Bad Wind Blows in My Heart before playing a set heavily culled from that recording.

We were introduced to new songs, among them Seabird, performed here unadorned and without the accompaniment of his band, and Catharine and Huskisson, a tribute to the so-named streets of Liverpool’s Georgian quarter.

Where Seabird is a bittersweet love song suggestive of a hopeful future thwarted by the weight of past experience, Catharine and Huskisson is a rollicking romp evoking the sights, sounds and edginess of streets in the hinterland of the city centre. The suggestion from the crowd that it might yield a hit was met with knowing derision by Bill, highlighting the difficulties for defiantly independent artists away from the security of their adoring fans. 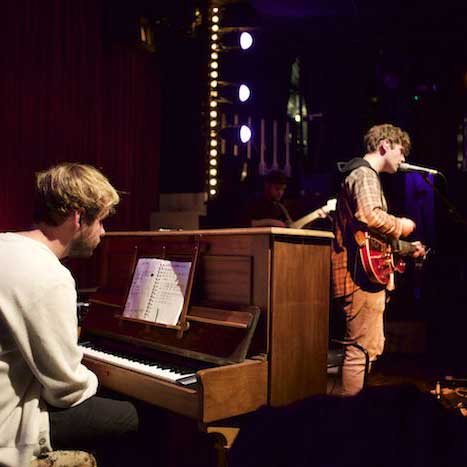 After previously having chided his father for a lack of attendance at his shows, Bill dedicated The Lemon Trees #3 to his dad by way of apology. His subsequent performance felt poignant and every bit as emotionally charged as anything Saint Saviour had previously delivered. Proving he can do serious as well humorous, the lyric ‘There I’ll be with your voice in my heart‘ is enough to bring a tear to the hardest of eyes.

It is often said that you should avoid religion and politics when engaging in public discourse; in Liverpool you can add football to that mix too. It is therefore a sure sign of the affection in which Bill is held that he can get away with a gentle chide aimed towards the red half of the city. That the interruption to his set closer, Wild Swans, ostensibly to adjust his microphone stand and triggering his comment ‘It’s not over until I say it’s over, we go again, we don’t let this slip‘, is met only with laughter and good humour is revealing of both his genial demeanour and the high esteem in which he is held. Well, that or everyone was an Evertonian.

What makes a Bill Ryder-Jones show so appealing is his rare gift of elevating the simple and the humble into something approaching the magical and far in excess of the sum of its parts. His plainspoken lyrics, that in lesser hands might appear cliched, are imbued with a romantic eloquence that is complemented by his often minimal guitar playing that sounds as distinctive as anyone there ever was. He is a special talent and is too often overlooked – although by the reaction of The Kazimier audience, not when on home territory.

In many ways it was a unique event with a special atmosphere. Clearly a night of two halves, we’re sure Bill would be the first to admit that Saint Saviour just about shaded it.