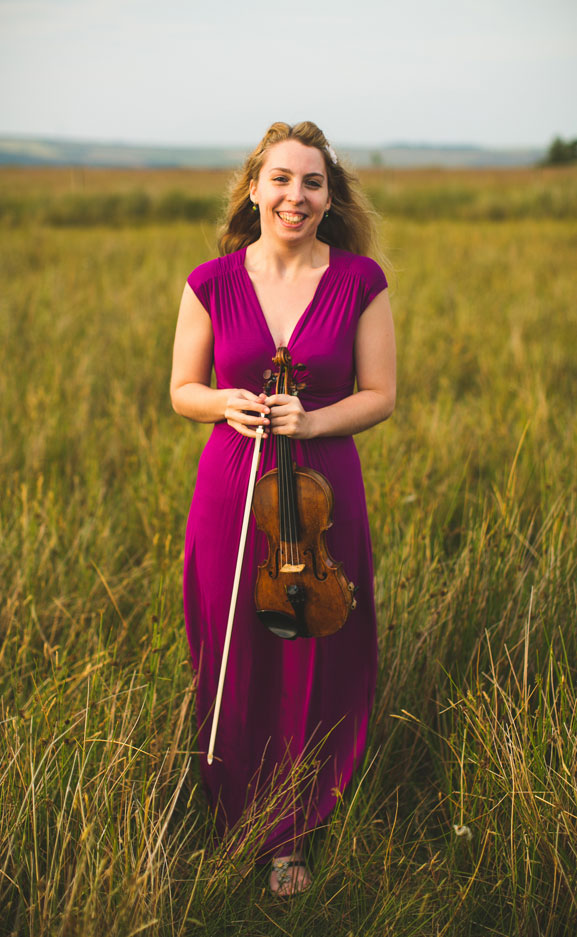 She tells us more about herself, her music and why a Camerata concert can be an emotional experience.

What’s been your favourite Camerata concert?
It’s difficult to narrow it down but the concert with Beethoven 5 and Beethoven’s Triple concerto was very enjoyable. Gábor has such an amazing sense for Beethoven it was fun to find out how he sees the music. We always get our parts to look through before the concert and Gábor puts in all his own markings, including accents, phrasing and dynamics so even before rehearsal you get a picture of what he’s going to want. This concert was also Giovanni’s last so everyone was going for it 100% to make it a special one for him.

Why the violin?
At home we had classical music around us all the time. My Mum is a piano and singing teacher and Dad is a keen amateur pianist and they both love string repertoire. It was a natural thing to play the violin as we were surrounded by a love of music. I have 2 brothers and 1 sister – all string players and when we were younger we played in a string quartet.

Is there anything special about your instrument?
I’m actually between instruments as having recently left the RNCM I had to hand back the Amati violin I had on loan. The exciting thing is that I’ve commissioned a new violin, which is being made by Stephan von Baehr, an up-and-coming German maker based in Paris. I spent 3 hours with him recently playing some of the violins in his workshop and talking about music – he has an amazing knowledge of violin playing itself and this understanding is transferred to his instruments. The only drawback is it won’t be ready for another year and a half!

Is there anyone who has particularly inspired you eg teacher, mentor or fellow musician?
I had some lessons with Giovanni (Guzzo) while I was still at college. I love his attitude to music making – to have fun while still maintaining the highest standards which is not always an easy thing to do. I also had a masterclass with Renaud Capuçon about a year ago. I loved just watching him play he has an amazing technique but he’s also very expressive and musical. He’s a great teacher too – he doesn’t beat around the bush but rather than knocking your confidence he inspires you to go away and work even harder.

You have your own string quartet (the Zelkova Quartet). What skills do you think transfer to chamber orchestra playing?
Gábor is always saying to play as if you are performing chamber music. In a quartet you communicate a lot by feel and gesture – you have to feel something in common together to create a particular character. The key is to listen to others and respond to them, rather than dwelling on individual beats.

What’s your favourite piece of music?
Brahms is my favourite composer for a number of reasons. The Violin Sonatas are so beautiful and his chamber music particularly the quintets and sextets such fun. But it was his Fourth Symphony which I played when I was 14 that made me first realise that playing the violin was something I wanted to do professionally.

What do you do when not playing the violin?
I’m involved in a lot of things for my church including outreach work with homeless people. On the odd occasion I have a free day I also love to go walking in the Peaks or the Lake District.

Which soloist have you most enjoyed working with?
It would have to be Martha Argerich. We didn’t have a lot of time to talk things through with her before the concert so on stage it was very exciting – the orchestra very much had to react to what she did. She has such an amazing presence when she walks in a room – we all went quiet!

What makes Camerata special for you?
With Camerata I fully trust the musical vision that is being portrayed. Led by Gábor every member of the orchestra puts in everything they have at every moment. It is a group of great musicians, inspired by both the music, being part of Camerata and Gábor. I went to quite a lot of Camerata concerts before I became a member. I remember one particular concert not long after Gábor had joined. The orchestra was playing Mozart’s Symphony No.40 and I found myself crying. I don’t normally react this way but this concert was so emotional in the best possible way. It was an all- round amazing experience – if only all classical concerts were like Manchester Camerata’s!

You can see Manchester Camerata performing Mozart’s Symphony no.40 at the RNCM on Wednesday 11th February, along with Elgar’s Cello Concerto and Bizet’s Symphony in C.