Top reviews are still rolling in for our recording with Jean-Efflam Bavouzet of Haydn’s Piano Concertos, the latest from James A. Van Sant writing in the American Record Guide. 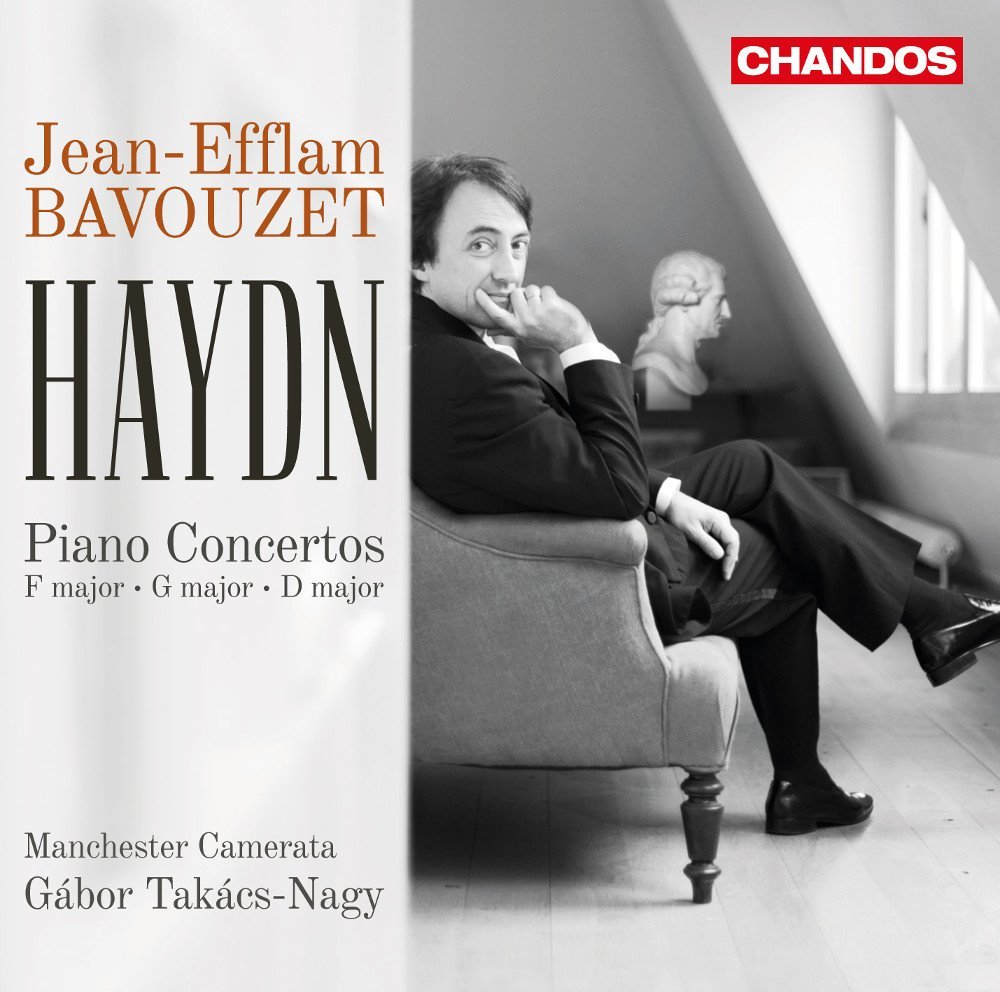 The distinguished French pianist Jean-Efflam Bavouzet has taken time off from his project of recording all the Haydn piano sonatas (Chandos) to record three little-known piano concertos of the great 18th century Austrian master.  The results are glorious.

A brief note of musicology is in order.  It seems Haydn wrote about 20 keyboard concertos, for harpsichord, piano and organ.  Out of this list three works have been authenticated as actually written by Haydn for piano, in the mid 1760s-70s and performed under his name, though not necessarily by him.  A few recordings have been made over the years (pianists such as Entremont, Ax, Hamelin, Andsnes), but the Haydn concertos are not much played in concert.  Bavouzet says he hopes to reverse this inequity.  This recording has the three authenticated concertos, most recorded – 3 in F, 4 in G and 11 in D – performed with a chamber orchestra of about 30 players including occasional woodwind and horns.  The Manchester Camerata (UK) is an ideal partner for Bavouzet, joyfully joining him in his light-hearted creative approach to breathing life into the 300-year old scores.

Best known and most formally structured of the concertos is the D-major.  Although a bit routine sometimes, it is – as is always with Haydn – full of movement and wit.  It ends with a famous rondo “in Hungarian style”, which was said to shock Parisians not accustomed to “Balkan” music.  The other two little (19-minute) concertos are exercises in melodic invention, variations, and ornamentation that never fail to fascinate listeners.

But the real reason to make this record is the daring-do of Bavouzet, who has taken it on himself to write the cadenzas, add variations and moments of harmonic and rhythmic invention, and gather the whole glittering creation into as high-energy and joyful a bundle of piano virtuosity as you will likely ever hear.  His inventions are always in the spirit of the music and tastefully serve its Haydnesque ends to surprise and entertain us.  Old Papa Haydn would approve!  If I had five stars to give I would assign them to composer and pianist.

I want to mention Rachel Smith and Jonathan Cooper who are producer-editor and sound engineer of the Chandos series.  The pure sound is from a Yamaha 9-foot concert grand at the Royal Northern College of Music at Manchester.  My thought is these are historic recordings, unlikely to be made again with the musical imagination and creativity of an artist such as Bavouzet, captured in the best of modern sound – music for the ages.  Bravo to all concerned!

Back to News
Donate to Camerata Sign Up To Newsletter

Book Tickets What else is on Archives